Every Other Friday - Eileen Cook

Eileen Cook is a multi-published author with her novels appearing in eight different languages and optioned for film and TV. She spent most of her teen years wishing she were someone else or somewhere else, which is great training for a writer.  Her latest release, THE ALMOST TRUTH, came out in December 2012.

You can read more about Eileen, her books, and the things that strike her as funny at www.eileencook.com.  Eileen lives in Vancouver with her husband and two dogs and no longer wishes to be anyone or anywhere else.

Tell me about THE ALMOST TRUTH.
My most recent book is THE ALMOST TRUTH.  It's the story of Sadie, a teenage con-artist. When she suddenly loses all her college money she knows she has to pull the ultimate scam if she's going to be able to escape the small town island life she hates.  When she notices that she looks like the age enhanced photo on a missing child poster, she thinks she's found the perfect con- until she begins to suspect she may actually be the missing girl.

What drove you to write THE ALMOST TRUTH? Who did you write it for?
I rarely can remember where the idea for a book begins, but this book is different.  I was riding on the ferry and saw a missing poster. I was looking at the age enhanced photo and it occurred to me how odd it would be if you looked like that picture. In that instant the idea snapped into my head and I rushed back to my seat to write it down.  I find all my books deal in some way with a character's search for their identity.  One of the hardest things to do in life is decide who you want to be- not who others want you to be- but who you want to become.

What were your biggest obstacles?
I am lucky in that I'm not someone who finds writing hard.  I love the creative process and the chance to "make things up" all day long.  However, no matter how well a book is going there is always a moment that I lose faith in the story.  It most often happens around the 3/4 mark.  It suddenly occurs to me that the story isn't working at all. The characters stink. I have no idea how to make the ending work.  I have a moment of panic where I'm sure the entire book is going to have to be thrown away.  After a few books at least now I recognize that this is going to happen and manage to avoid panicking.  I remind myself that it doesn't have to be perfect, just finished. Once I have it done I can fix almost anything in the revision process.

What are your productivity tips?
I'm a huge fan of setting goals.  I set a weekly word count goal.  I tell myself if I get it all done in two days I could take the rest of the week off, or I can chip away it each day. It's easy to estimate- if a book is going to be 70,000 words and you can do 5,000 words a week you should be able to have a rough (and I do mean rough) draft in about four months.  Then it takes me usually another four months to revise the draft and make it work.

My other productivity hint is to turn off your email and Twitter account while you're writing.  It's so easy to be distracted, give yourself every advantage you can! 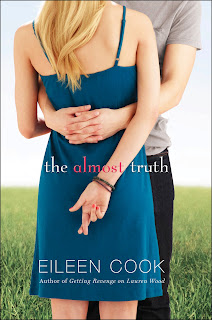 Here is the back of the book blurb:


From the author of Unraveling Isobel and The Education of Hailey Kendrick, a smart, romantic novel about a teenage con artist who might be in over her head.

Sadie can’t wait to get away from her backwards small town, her delusional mom, her jailbird dad, and the tiny trailer where she was raised…even though leaving those things behind also means leaving Brendan. Sadie wants a better life, and she has been working steadily toward it, one con at a time.
But when Sadie’s mother wipes out Sadie’s savings, her escape plan is suddenly gone. She needs to come up with a lot of cash—and fast—or she’ll be stuck in this town forever.
With Brendan’s help, she devises a plan—the ultimate con—to get the money. But the more lies Sadie spins, the more she starts falling for her own hoax…and perhaps for the wrong boy. Sadie wanted to change her life, but she wasn't prepared to have it flipped upside down by her own deception. With her future at stake and her heart on the line, suddenly it seems like she has a lot more than just money to lose....

Every Other Friday - Kourtney Heintz