Bob Zaslow (Mr. Z) has been writing plays for adults since 2006 and is a member of both the AERY and Westchester Collaborative Theatre writers’ groups in Putnam and Westchester Counties, NY. He has also written five plays for children, which are distributed to schools across the country. He has been a three-time finalist in the AERY Festival and his plays have been performed off-off Broadway at the Manhattan Repertory Theatre. He’s also completed a musical dramatic comedy, The Seed of Abraham, performed at the Bleecker St. Theater in the 2011 FringeNYC Festival.

Bob was a Creative Supervisor at Grey Advertising for fifteen years and has written and produced more than 100 commercials, winning a Clio and two Effies . As a film-maker, he won an American Film Festival award for his documentary film, Nadine Valenti, Portrait of a Painter. He is currently an art and music teacher in an elementary school in the Bronx.

Tell me about Rap Notes--Shakespeare’s Greatest Hits (Vol. 1).
It's a strange marriage of 50 Cent, CliffNotes, and William Shakespeare. I’ve written the story of five of my favorite Shakespearean plays (Hamlet, Macbeth, King Lear, Romeo & Juliet, A Midsummer Night’s Dream) but not in prose, in rhyme and rap.

What drove you to write Rap-Notes?
When I was a copywriter at Grey Advertising, I wrote a 60-second radio commercial for Bloomingdale’s Back to School in rap. I not only liked it a lot, but the commercial seemed to drive a lot of business. When I left advertising and became a fifth-grade teacher, I decided to use rhymes to help my students get excited about academic work. It started with social studies. Results--more enthusiasm for learning and higher grades.

Since I found Shakespeare’s language difficult in high school, but began to love his work as I got older, I decided to write a series of raps all about the plays. I thought I could put a rapper on YouTube, and any kid having a tough time with the Bard could view Hip-Hop Hamlet and get the whole story in fifteen minutes, in a humorous, memorable package.

After that, I decided to write a whole series of raps. Why stop at Hamlet? So I wrote The Macbeth Rap followed by Rappin’ Romeo & Juliet, King Lear and A Midsummer Night’s Dream.

What were your biggest obstacles?
Other projects. There was (and is) always something I’m working on-- a short play, a musical comedy, a children’s book…and my teaching preparation…that has to get done too. Plus, I’m an email junky.

The thing is, these raps were so much fun to write, I didn’t resist much. For instance, I wrote most of Rappin' Romeo & Juliet over six nights in a motel in Seattle (and on the plane there and back) while my wife and I were visiting our daughter.

Who did you write the book for?
I wrote this book for all the students out there who might be a wee bit intimidated by Shakespeare, as well as their parents and teachers who want them to succeed. My other audiences include people who love Shakespeare and would like to read the stories in a brand new, entertaining way.


What productivity tips do you have?
My biggest tip of all is something I learned as a junior copywriter at Marsteller Advertising in the early 1980s. Namely, when you sit down to write, KNOW that you will come up with good stuff. Never harbor a doubt. I knew if I didn’t produce great copy, the company would soon find someone who could. So today, when I’m writing a play or another rap of Shakespeare’s best, I won’t listen to a negative thought.

I have to draw a line in the sand between that delicate thing called the idea and that loud-mouthed left-brain that says, “So?” That rewriting stage comes well after the creative surge.

In addition, I’m not trying to be a poet, just a “rhymer.” So I don’t take myself too seriously. And I never, ever try to be perfect. I trust in whatever the Muse sends my way. Also, I figure if it makes me laugh, it’s gonna make someone else laugh. 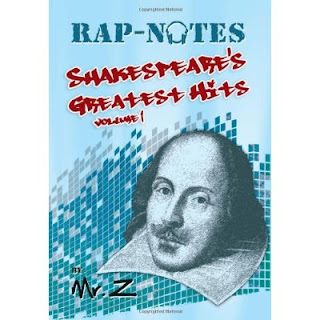