It is my pleasure to welcome a guest post by Hillary Rettig. Hillary is the author of The 7 Secrets of the Prolific: The Definitive Guide to Overcoming Procrastination, Perfectionism, and Writer's Block. Hillary has taught writing and work productivity at Grub Street Writers, The Mark Twain House and Museum, TheLoft.org, SavvyAuthors.com, and many other venues. For more information on Hillary and her work, visit http://www.hillaryrettig.com/the-7-secrets-of-the-prolific/

There are lots of techniques that will help you boost your writing tempo, but one of the best is probably to show your work early and often:
Show them to: critique buddies, workshoppers, editors, sympathetic friends and family members who get what you're doing and support it, and your social media lists.

The reason "showing" is such a powerful productivity enhancer is because writers with perfectionist tendencies tend to be terrified of having their work seen and judged, and so they create a "wall" between themselves and potential readers. They hide behind that wall, endlessly writing and revising, but never finishing or submitting or publishing--and sometimes they don't even write at all, since not-writing is an even more effective strategy than not-finishing for remaining unseen and unjudged.

And the more these writers hide, the taller and stronger the wall gets, until the idea of publishing seems truly terrifying and insurmountable.

In contrast, showing early and often helps "soften" and eventually eliminate the wall. And that tends to speed up the entire writing process, from conceptualization and drafting through to revising, submitting, and publishing. (The core reason this technique works, by the way, is that it helps you heal from any shame and ambivalence you have around your work.)

And this is all, of course, congruent with 21st century marketing via social media. We're long past the days when writers sequestered their work until it was fully polished and edited. These days, readers want to share your process via social media, and maybe even be included in it.

So, show your work early and often. Just be careful whom you show it to, however, because you don't need callous or clueless feedback. (Maybe no social media at first, until you get more resilient.) And extra points for telling your "showees" what response you want: e.g., "I know this is a draft so I don't want detailed feedback on grammar and syntax. But let me know if the general idea works for you." Or, "I really dig this metaphor I came up with!!! Just wanted to share it with you; no reply needed."

Eventually, you'll probably come to enjoy showing, and the resulting ongoing dialog with your community--and you'll probably also write faster than you ever dreamed possible. 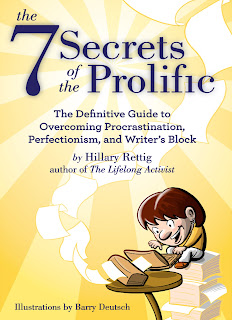