Every Other Friday - Kara Ashley Dey

Kara Ashley Dey says she likes fantasy, speculative and paranormal fiction with romantic elements. She also enjoys interviewing multi-talented artists and writers to find out what "makes them tick." She believes sharing experiences is a great way to learn about the world and ourselves, and she is a firm believer in rejoicing in other people's successes - "It's free and it feels great."

She says, "Living in Houston with my darling husband has taught me about the blessings of great neighbors and Texas BBQ. My favorite critics are my two plump cats that purr their pleasure at most everything I write."

Tell me about STEALING SKY.
My book starts off as a "spoiled girl meets cowboy" sort of romance, but has a big twist by Chapter Three. Before you know it, the hero and heroine are over their heads in trouble and that doesn't stop until the end.

What drove you to write STEALING SKY? Who did you write it for?I knew that I wanted to write a space pirate book, but I also hoped to turn the pirate theme on its head. Instead of the heroine being abducted by a roguish pirate captain, I wanted the hero to be captured by sexy female space pirates. This also afforded me many sub-plots and twists and turns. Every character has a reason for what s/he does. You get male and female points-of-view from several characters.

I also wanted a book that would appeal to readers who enjoy action-adventure stories, and science fiction, and who like a touch of humor mixed in with their occasional angst. STEALING SKY is for men, too. It's fun and hot. The hero, Skai, is not just a man without a shirt. I think men will want to be him and admire him. The story is just as much about him as it is about Cassie and the rest.

What were your biggest obstacles?
Knowing when to stop editing myself. Thank goodness I have an amazing editor, Tania. Plus she is a friend so we have a relaxed process. This helps to quell my panic over whether the book is perfect or not. I've learned that striving for perfection can gut a book--literally rip the charm right out of it.

What are your productivity tips?
Number one most important tip--Manage time, which I don't. It's my biggest challenge this year. I have so many projects and websites that if I get even a little behind, stick a fork in me. If I accomplish time management,  I will feel like this year has been a big success.

Just wanted to add that STEALING SKY made the top 100 Galactic Empire books on Amazon. Yay--I'll take that, thank you!. :) It's currently 40% off. 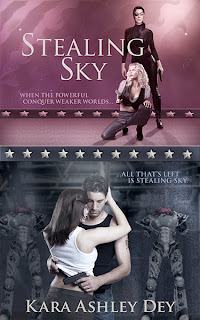