I love "The Odd Couple." Nasty neat Felix and sloppy Oscar being forced to live together? Genius. You know that, for almost anything, they will make opposite choices. Felix will go for opera, while, Oscar will go for jazz.  Felix prefers a fine wine, while Oscar likes a cheap beer.

And so on. This contrast gives us someone to identify with and connects us with our own choices. On bigger issues related to life events (marriage, death, coming of age) and social concerns (poverty, freedom, loyalty), it sets up conflicts between the characters that draw us in. Differences put things that matter in high relief, so we see what otherwise is invisible. And sometimes contrasts can take us on a journey that makes us wiser.

The bigger the contrast, the bigger the story. Besides having characters with contrasting views, you can have characters in contrasting circumstances (rich and poor). You can give them different allegiances (as with countries at war). And you can find them in different stages of life (parent and child). A playwright once told me that the audience is immediately drawn in if the characters look different. Even having a man and a woman on stage sets up a contrast for an audience.

Fish out of water stories (like "Crocodile Dundee") provide a contrast in setting and character. One of the advantages of these stories is that they get the audience to see a familiar setting through unfamiliar eyes. Disaster films do much the same thing by taking the familiar and twisting it into a new shape -- often exploring the meaning and value of what we take for granted. Time travel stories usually take a protagonist from our time and put him or her into an era where our own knowledge and skills would need to be adapted, so we have a new appreciation of our own lives. In "Back to the Future," Marty can create a skateboard that allows him to escape bullies, but he doesn't know how to open a bottle of cola.

The contrasts need to be big contrasts, and, ultimately, they need to reveal important truths. Moving back in time a few years or having characters who went to different but equivalent high schools in the same town is not especially interesting or revealing (though good stories might be built in other ways). In Genesis, Cain and Abel may be siblings, alike in many ways, but one is a shepherd and the other is a farmer. One offers God a sacrifice of that is not acceptable, while the other offers one that is. And this leads to murder, and the question, "Am I my brother's keeper?" The result is a memorable story that has resonated with millions of people over thousands of years. 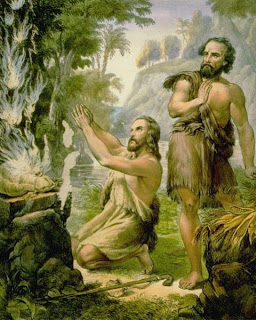