Every Other Friday - Doug Solter Interview

Doug Solter went to college at Oklahoma State where he earned a B.A. in Radio/TV/Film production.
Doug started writing in 1998, and three years later his fifth screenplay, FATHER FIGURE, became a semi-finalist in The Academy of Motion Pictures Arts and Sciences' Nicholl Fellowships in Screenwriting. Two more scripts ranked in the top 15 percent of the Nicholl Fellowships for two different years and his tenth script, RAIL FAN, became a quarter-finalist in the competition in 2009.

Tell me about your novel Skid:

My young adult novel Skid is about a teen girl racer from Oklahoma who travels to Europe to race in Formula 1. She starts as a test driver for a struggling German racing team and then claws her way up to competing for the world championship. Meanwhile, she wrestles with an awful secret regarding her father's deadly car accident while trying to make sense of her best friend's romantic feelings for her. And the stress of her new job isn't exactly helping.

What drove you to write Skid?

Growing up, I've always loved car racing. My dad would take me to SCCA races at the road-racing circuit near my home. (It's the Oklahoma track featured in the book.) I particularly fell in love with Formula 1 due to the excellent John Frankenheimer film Grand Prix starring James Garner. That planted the seed of wanting to write a story set in the world of Formula 1.

But, I didn't want the standard young-guy-is-mentored-by-the-older-guy type of sports story. When I switched from screenwriting to young adult novels, I saw this idea in a new light. What if the girl was a teen? I wrote a previous script version of this idea with a woman in her early 20's. But cutting that age by six years made a huge difference to the story and thus fueled the book. Please excuse the pun.


What were your biggest obstacles?

First was getting into the head of a teenage girl. Many young adult stories are told from the first person point of view, and I had to describe and interpret the world through a restricted point of view of a girl. So I had to summon whatever acting skills I possessed to make that POV feel real.

Second was getting the teen voice down. Teens are very smart. They know if you get them or not. Usually an adult talks down to them or tries teaching them how to be or how to act. When you write for a teen audience, you have to look at them as equals. You can't go in thinking, “Oh, they're only kids,” because that's NOT how they view themselves.

You must also put aside all your adult experience and write from a view point that looks at the world with shiny, new eyes, ready to dive in because death is somewhere out there at infinity. Teen characters don't have this prepackaged wealth of experience that adult characters have coming into a story. As an adult, it's easy to forget this.

What are your productivity tips?

Write every day. Or if you must skip a day, feel guilty about it. Even if it's just for an hour. Write. You'll get more accomplished than most people who wait for “inspiration.” Inspiration will fail you. I'm convinced that the Writing Muse lives under a pile of work, and she only comes out when you're slugging it out with your story. She might give you the idea in a shower, but she doesn't like helping you write it unless you're fully committed to the project. 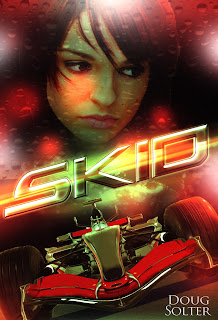